A friend sent an e-mail about putting in a pitch for this event entitled, "Ignite-New Mexico."   After letting it sit in my in-box for a while, I thought, "What if I did a talk about talks?"  Seems to me that talks are a relatively recent thing, but the question I have is why.   Are we talking more?   For example, we have Ted Talks, Bioneers, BIL, South by Southwest, Poetry Slam, Story Slam, the Moth, and others.   We are talking more, but why? 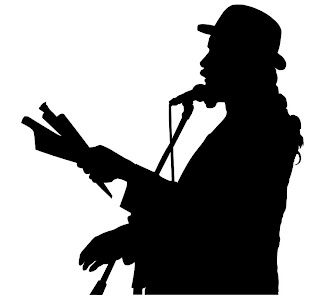 I asked a friend and he responded, "People need intellectual stimulation and they used to get it by reading.  Nobody reads anymore."
Perhaps.  We certainly don't read Dostoyevsky or Joyce much anymore, but a lot of people who go to talks certainly read.   So I'm not so sure that intellectual stimulation could explain the talks popularity.
Another friend suggested that people were missing collective experiences.  Growing up, I used to go to church every Sunday.   There I learned how not to fall asleep or fidget, but I also learned how listen to the preacher basically talk.  I haven't been to a church since high school.  I haven't really experienced that kind of talk, but the other function of church:  building community and hanging out, hasn't disappeared.   We see movies collectively, go to art openings and listen to rock shows so I'm not sure if a missing collective experience explains it either.
I think that if it's true that these talks are a relatively recent phenomenon, then you have to ask yourself why.   And my reasoning is a little bit complicated.  I think people are missing unmediated experiences.   If you watch the evening news, you know the anchor didn't create the whole thing.   And if you watch a movie, you know the producer didn't create the whole thing.   And even music, with auto-tuning and digital engineering, is often billed as a single person's creation, but it can't really be.   There's committees that write television shows, change the ending of movies based on audience feedback.   There are songs that are sold and then recorded by the people who bought them.  I listened to the president make an argument for bombing Syria and I couldn't help but think the whole thing was some sort of sinister plan to make us do it or make us not do it.  It was part of a bigger plan that felt orchestrated no matter which way you looked at it.
I think we just want something that's real.  And talks because they quite often talk about things that noone would share with a complete stranger, talks because they leave the speaker vulnerable and exposed, and talks because they seem so out of left field and can't be anything but real do that.


Ultimately, though, I'm not sure if there is an answer.  Maybe we do need more intellectual stimulation or yearn for different collective experiences or really want people to be vulnerable and don't want to feel like it's all calculated?  I don't know.   I know that talks are popular.   But even this is mediated in a way.   So why are you here?
Posted by Don McIver