Overview:   In June, around the Summer Solstice, my wife, my dog, and I set out to hike the Albuquerque Bosque from end to end over two days.  It was well over a hundred degrees and after starting later than expected we didn't make it as far the first day as we hoped.  But we did make it.

Now, three months later, around the Autumnal Equinox, we set out to do it again.  Our route was slightly different and, with the weather being a lot more pleasant, broke the day into a thirteen mile day and a five mile day:  eighteen total miles from Valle de Oro National Wildlife Refuge to the Alameda Bridge right on the border between Albuquerque and Corrales.

The things we wanted to do differently this time were pretty straightforward:  1) don't get lost at the south terminus and get into the bosque sooner, and 2) walk even more on the westside.  So, the route was a follows:  we'd walk on the east side from Valle de Oro to the Rio Bravo Bridge, cross the bridge then walk the west side from Rio Bravo to the Central Avenue Bridge, cross then walk the east side from Central to the Montano Bridge (and that would be day 1).  On Day 2, we'd cross the Montano Bridge then walk the west side bosque all the way to Alameda.

And that's exactly what we did. 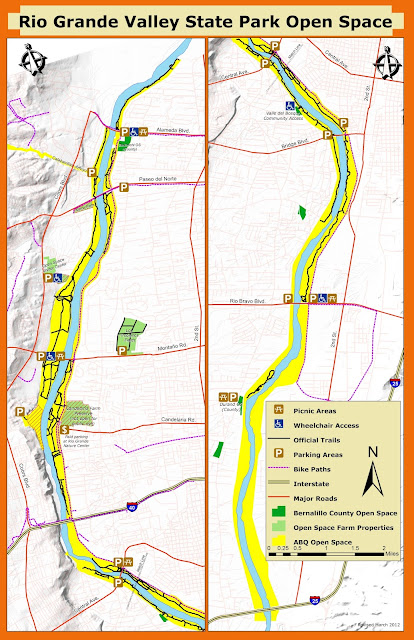 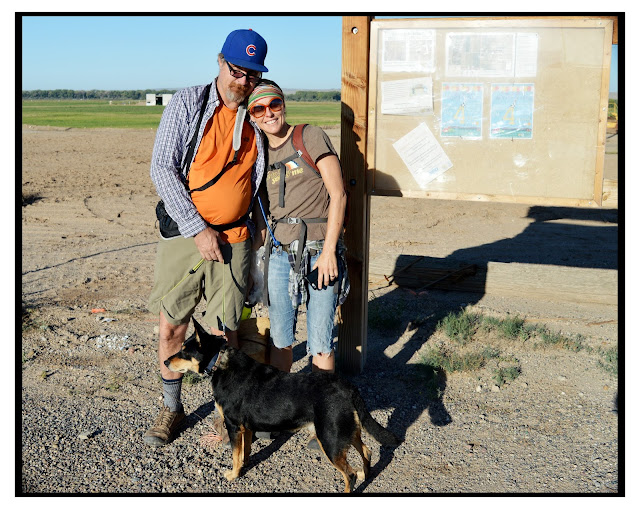 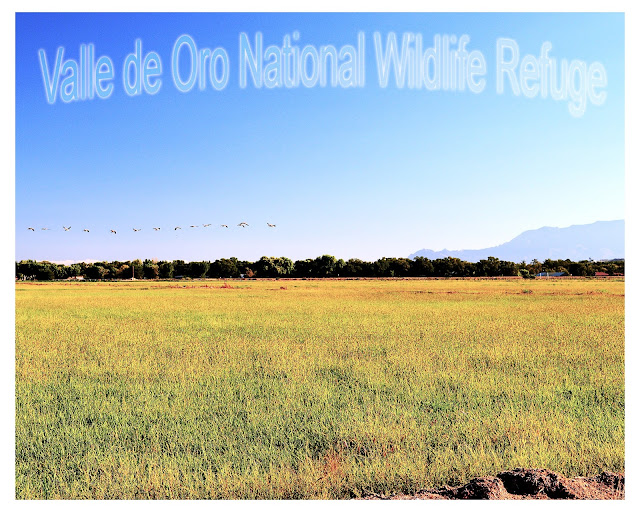 It's eight in the morning, the weather is perfect for walking and we're going to actually go to the far southeast of the refuge to see if we can access the bosque unlike last time.


And indeed, at the southeast corner of the refuge there's an access over the drain and into the bosque. We're in the bosque now. 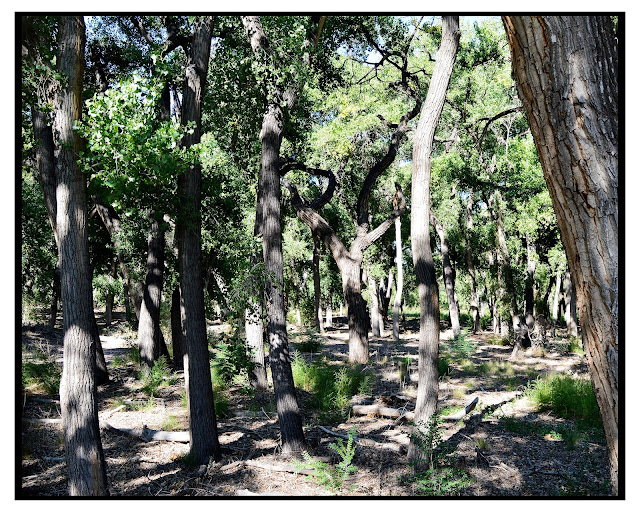 The biggest difference between the start of fall and the start of summer (besides the temperature) was that things we're dying instead of just being born.  There wasn't any cottonwood from the trees on the ground, and the river, which you'll see, was much lower.

There wasn't a trail in the bosque so we walked up the acequia road. 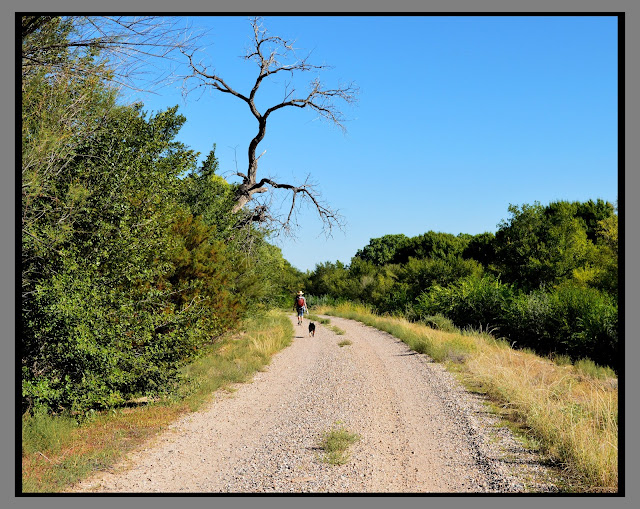 Common markers of Rio Bravo Bosque are the two bridges that seem to go nowhere.  They're not marked or labeled and there's a trail that by passes them.  My guess is the flood plain that necessitated a bridge in these spots has filled up with sediment so now when the river overflows the banks and runs down the various channels, the channels don't run under the bridges anymore (or the that channels that do are filled with sediment so they don't get water anymore.  We've dubbed them Pearl's Bridge and Hubert's Bridge and we'll bushwack our way to them (usually tall weeds have overgrown the trail) and cross them nevertheless.


The other marker is where the cities treated water dumps into the Rio.  Quite often there will be people fishing in the channel.  Not sure what the appeal is for people as my stomach is turns at the thought of eating fish that live here. 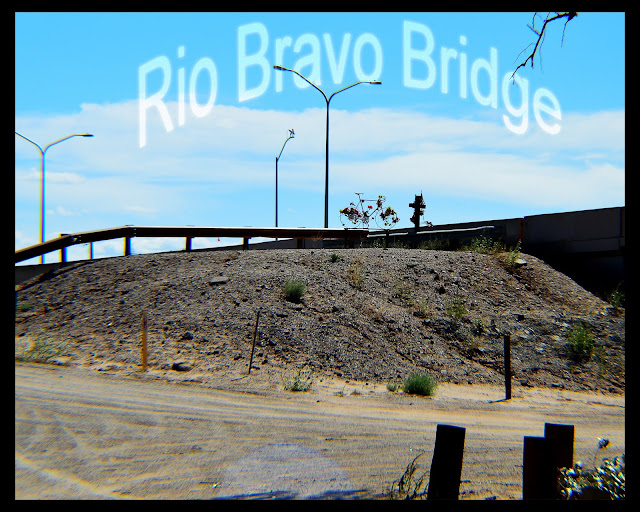 Once we reach the picnic area at Rio Bravo, we walk across the bridge (on the shoulder not the protected sidewalk (not a good idea at all)) to the West Side.

We rarely get this far south during our routine visits, but just up from Rio Bravo is a very large patch of Yerba Mansa. 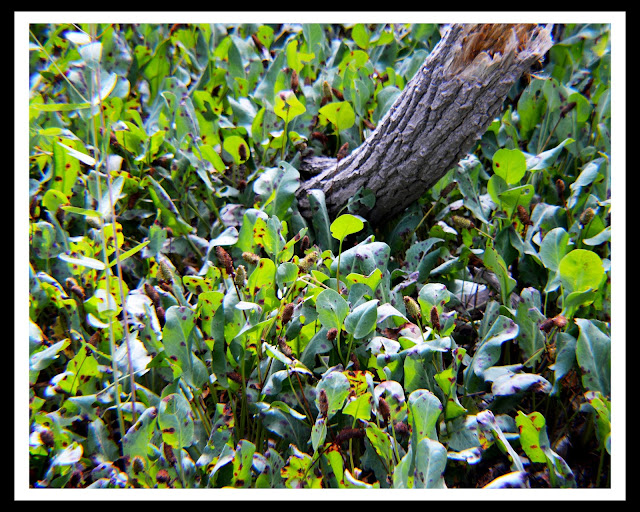 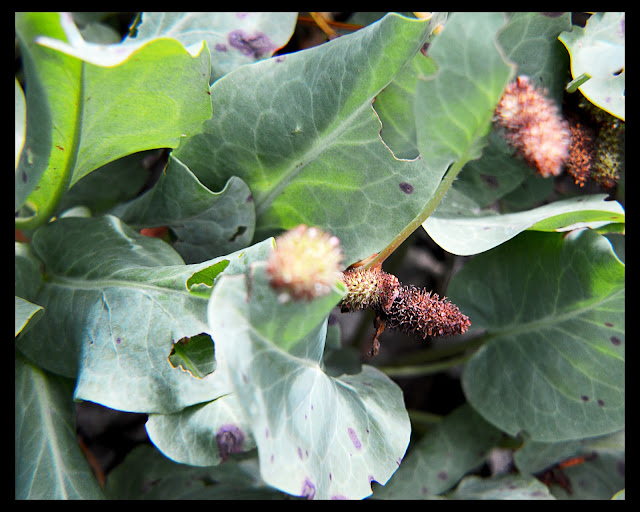 I didn't even spot it until it moved
and it swept across my vision;
its wings a slow beating whoop,whoop.
Then it landed, across the shallow channel
from the one time island
that lets me walk to the middle of the Rio
without having to get my feet wet at all.
It stood and arched its back
and its wings were grey, almost blue.

Almost blue.
It's color, and the noting it in my head,
and I thought of Chet Baker
his missing teeth,
and how I almost lost mine too
when drunk,
I wrecked my bike
and flipped over the handlebars
and met the pavement.
Bits of teeth now replaced by some sort of dental cement.
I was more mad than sad,
more red than almost blue.

Almost blue.
The sky this morning is clearly blue
and the light plays tricks
as I can never really see the Yerba Mansa
and its green leaves turning red
as fall moves slowly down the Rio.
The Great Blue Heron stood erect,
peering at me and perhaps wondered as I walked up towards him.
Am I a thing it should be bothered by
or is the sprightly, gangly black dog
that bounded in the water,
snapping at it to get its fill the real threat?
The sky reflected in the muddy Rio is almost blue.

Almost blue.
When I reached the tip of the island,
took a couple of pictures
it jumped up again,
whoop, whoop, whoop down the river
it's wings of almost blue beating the air that lifts it up,
till it alighted on the southern tip
of my island.

Almost blue.
I know so little about Chet Baker,
only listen to his songs every now and then,
but I wonder if he'd have traded his heroin habit
to get his teeth back again.
My dentist wasn't particularly upset,
just asked if I'd worn my helmet (I didn't),
and set to work on making my smile look normal.
My white teeth, my red tongue,
and Elvis Costello's tune running through my head
Almost Blue.
Almost doing things we used to do
There's a girl here and she's almost you
Almost… 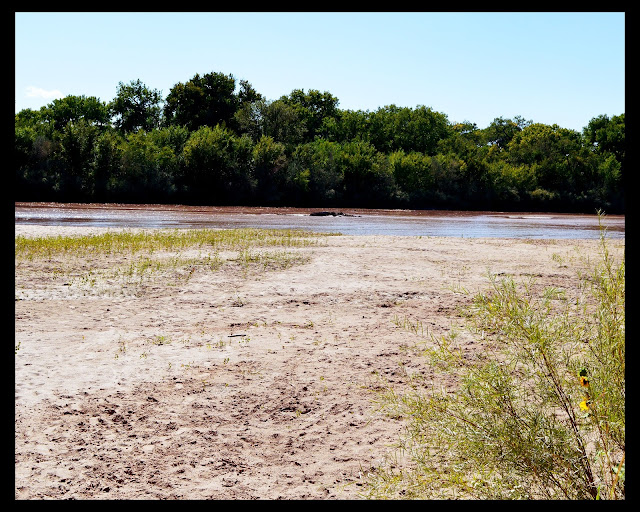 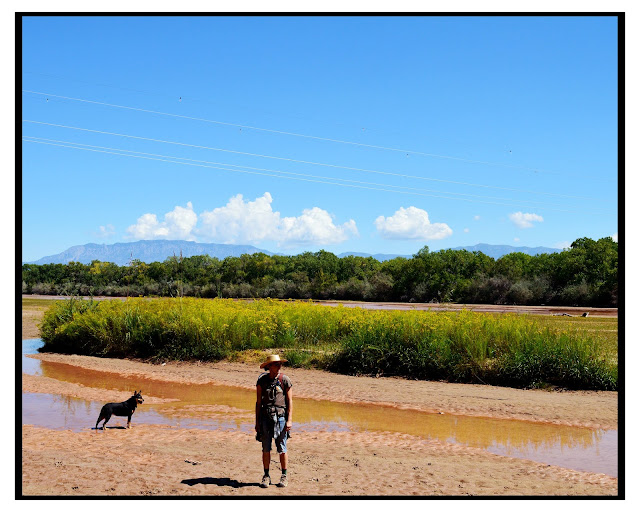 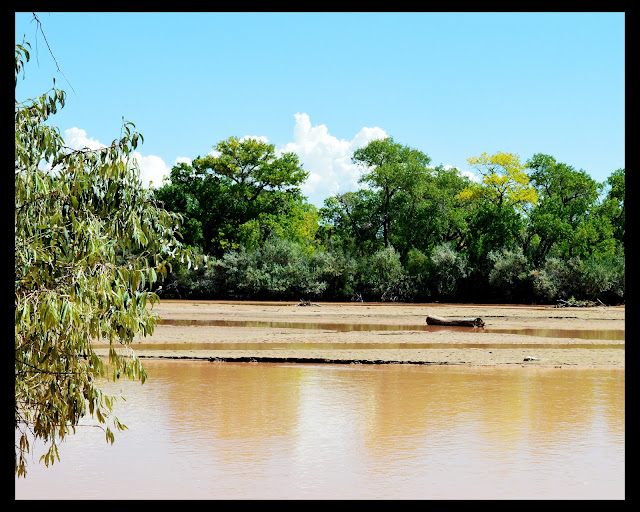 Some of the trees are changing; some of them aren't.  The river is low and filled with sediment.  The birds, during the day are scarce, and we have the river to ourselves.

Somehow my tulip lens hood comes unscrewed and I have to double back to find it.  Some  nice people saw it and as I walk back they meet me with it. 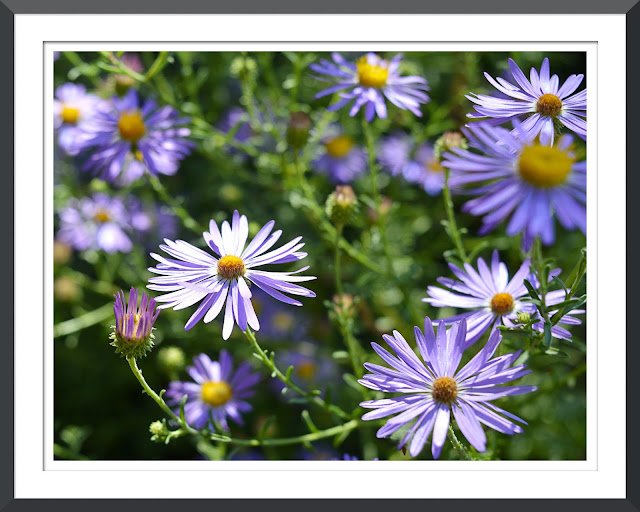 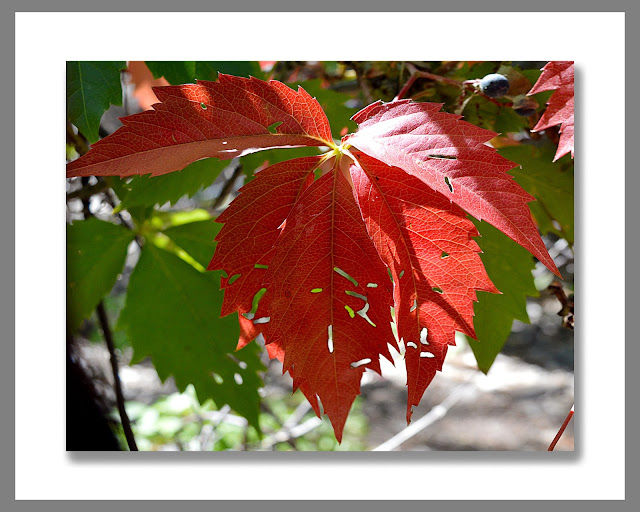 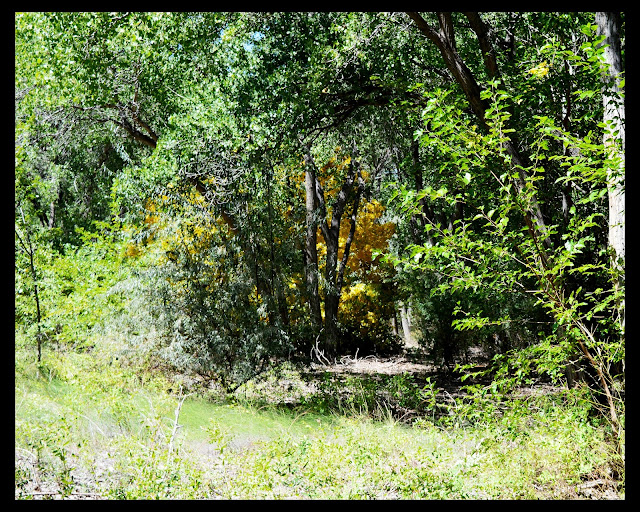 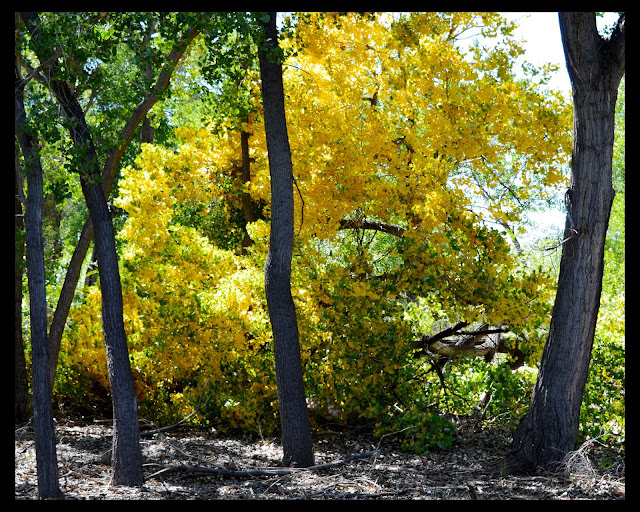 At Central we cross back over to the other side, hit up a gas station for more water, then head up towards Montano.

We're approaching the end of day one. There's Flying Star dinner and beer ahead as we make arrangements to meet our ride home. 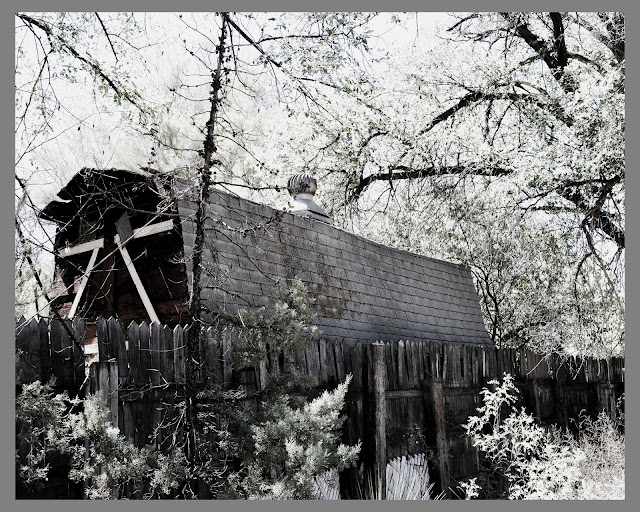 I order a beer and Fish and Chips.

Tomorrow should be a pretty quick jaunt over the Montano Bridge then up the West side bosque to Alameda.

When I was on the bridge during the summer, I noticed the locks attached to it, an Albuquerque version of Love Locks, but this time I didn't notice.

When I asked Mindy if they were still there she said that they were but I probably didn't notice because I'd been distracted.

I'm not sure what it is, but wearing a baseball cap sort of gives people some entry into talking to you, sometimes entry into giving you a hard time.   In my case, I was wearing my Chicago Cubs hat and they are having a great year.

On our walk, a young man, riding his bike across felt that he was justified in saying, "St. Louis is gonna win," as he rode by.

Why did my wearing a hat give this person permission to sort of rib a total stranger?  And since I've been sporting my Cubs hat most of the year, people feel sort of empowered to talk to me.  Sometimes I don't even know what they are talking about and only figure it out afterwards like "It's the hat, dummy."

For the record, and with hope that the young man referenced above will actually read this, the St. Louis Cardinals didn't even make the playoffs.


Pretty straightforward.  The path moves on closer to the Corrales Drain than the river, which seems enclosded by a thicket of Russian Olive on the banks.  The path is pleasant and shaded by cottonwoods; you hear the traffic before you see the bridge.

After a bit of route finding, you can walk up to the Alameda Wetlands and the City of Albuquerque drinking water project.

And then we are at Alameda: 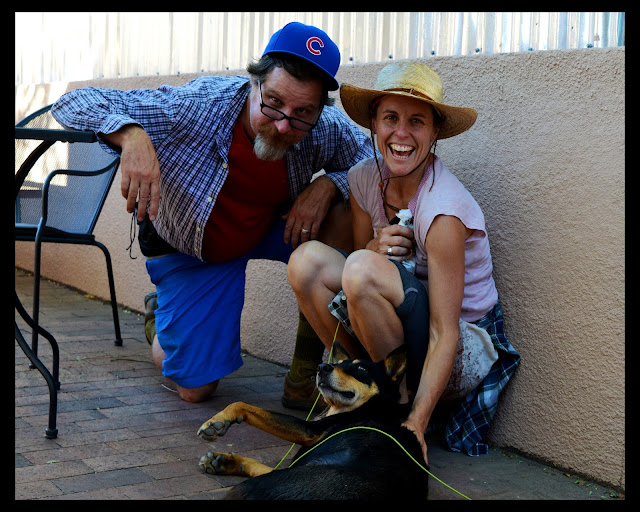 Decompressing with a beer at Boxing Bear Brewing Company.

Not as intense as the last Peregrination, and since we've done it, even more trees have begun to change color, bushes and plants are nearing the end of their natural cycle.  Fall is possibly the best season to enjoy the bosque as the mosquitos have largely abated, the day time temperatures aren't bad, and because the river is low their are views and areas that would be hard to get otherwise.

If you haven't checked out the bosque yet, I would recommend that you do.  The place is pretty magical.

Thank you for sharing your photography, poems & insights.

Thank you for sharing your photography, poems & insights.

What a great thing to do. Inspiring to us who just do small parts of the bosque often. Nice photo and writing accounts . . .