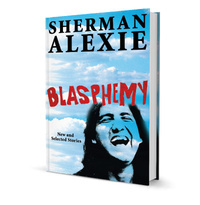 In a Time Magazine interview, Sherman Alexie mocks himself when he says, “Yeah, that’s exactly what I thought back in 1987: What’s going to make me really economically successful? Poems about Indian guys. I’m a capitalistic genius,” yet the joke is actually real. Alexie has had a lot of success writing about Indian guys. Taking stories from his earlier works, he’s added a few, shaken well, then published this collection: Blasphemy: New and Selected Stories, and I'd call it required reading.

Some of the characters draw on Alexie's own history: hydrocephalus, basketball, complicated father/son relationships, living on the reservation, and leaving it behind. Many of the characters appear in multiple stories; themes crop up again and again; and through it all you see his sense of humor, his struggles with alcoholism, and his willingness to tackle reservation life that mark this as clearly a book penned by a native, but also a great book (native or not).

Though clearly steeped in what it means to be a Spokane Indian in the Pacific Northwest, Alexie speaks to (and for) all of us. From a 2009 article in the NY Times, he states, “We all know the Indians were colonized by the Europeans, but every colonized Indian has been colonized by the Indian reaction to colonization.” While it failed for Native Americans a long time ago, we realize it's failing for all of us now. We’ve all been colonized; we’ve all been subjected to this experiment that boils us down to a demographic, commodity, market share, things that are quantified and sold. Yet, he's able to embrace pop culture, specifically using American Idol (from “Idolatry”) to preach, “In this world, we must love the liars or go unloved” that allows him to reach a broader audience.

His is the voice of one who admires tradition and heritage but is willing to look at it critically. These stories just feel right and reading them makes me revisit pasts and places I haven’t thought of in years. For example, I only have a passing memory of Spokane, the big city on the other side of the Idaho panhandle from my childhood home of Missoula, but I remember Indians. When I was younger, they were the gravestones scattered on the Little Big Horn Battlefield National Monument and the gray plaque marking where Chief Joseph and his band of Nez Perce Indians were caught just 22 miles down the road from my father’s birthplace. They were the very real fears of my great-grandfather’s childhood.

That fear was passed down, and it's Alexie, an unwitting diplomat from his tribe to mine, that made me revisit so much of my own perceptions, racism, privilege after reading this, and he’ll entice, use humor, make you look at what is hiding behind your mirror, and then laugh at you again. When the ending from “The Toughest Indian in the World” sneaks up on you, you’ll wonder why you haven’t read him before. Yet he’ll send you in all these different directions: moved, frustrated, angry, joyous, and, a lot of the time, just plain sad. I’m still shocked over how sad a single lone donkey on a moonlit hillside can be, how so many of us only realize how fragile our bodies actually are in some sudden random injury like a knee “exploding” on a basketball court, and how similar to Harlan Atwater’s “not being Indian enough” is to the experience of every white man I’ve ever met and their unease at being nothing more than “the man.” This is what good writing can do.

Blasphemy is a book of stories, so the commitment seems just right for this world where the only time we actually read is when our collective insomnia kicks in at 4 a.m. You’ll write down who you’re handing this tome too next…and remember because you’ll want to hoard and share it all at the same time. Required reading, like I said, and if that’s not enough praise to get you moving, I’m surprised you’ve even read this far.