There's something distinctly familial about this slam thing.

One of the organizers of this year's NPS is from New Mexico. She's also 7 months pregnant, and her parents trying, to save them time/money dropped off a high chair, two stroller, and a crib so that we could take them too her. So, the first challenge, a sort of tetris challenge was to get everyone's personal gear in a 15 passenger Chevy Van: 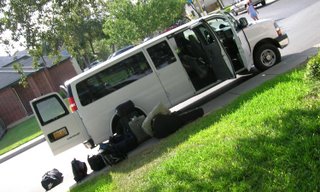 Let's just say the ride is uncomfortable, but we made it, driving across central/west Texas in the early morning where conversations descend into just random stories that the navigator tells so that I stayed awake as dawn crept up over Abilene and I saw windmills on the horizon, smelled gas and feedlots, and listened to somebody snoring in one of the cramped back seats. 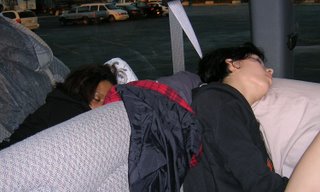 And yes, Texas is hot. And humid.

The first stop on the trip is a small 8 team event at Ruta Maya in San Antonio. Featuring teams from San Antonio, Austin, Boston-Cantab, Berkeley, Bowling Green, Corpus Christy, a pick up team, and Albuquerque. Split into two 4 team bouts, with the top two teams moving to a final round (with a one poem slam-off between the two 3rd place finisher to round out the 3 round, 5 team bout), the bouts were competitive and engaging.

Using the amazing duet between Damien and Jessica, ABQ jumped out to a quick lead and cruised into the final bout. In that bout, ABQ had to work but pulled out the win in the last rotation with a great solo piece by Damien. Good work Damien, and good call Kenn with hopes of doing well tonight in Dallas, which I'm not going to because I'm in Austin helping out with the last minute preparations.

So, blogging from the road and ready to listen, this is Don McIver, signing off.
Posted by Don McIver