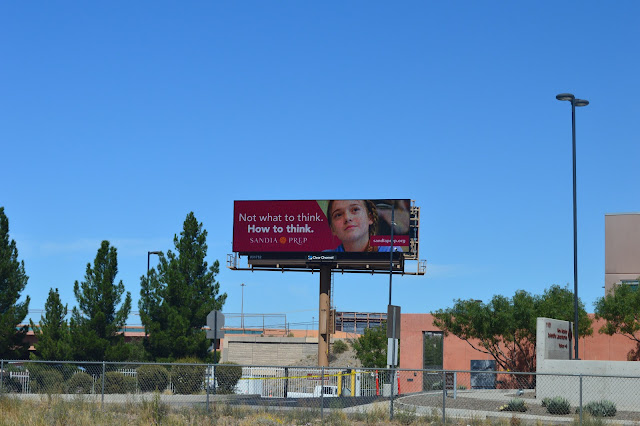 Act:   Just off the bridge that crosses I-25, Clear Channel’s electrical billboard cycles through 4 (?) advertisements in span of thirty seconds (?).  Visible from I-25 north bound it is visible to over 1.5 million cars per day.
Scene:  As parts of the country still struggle to recover from the Great Recession, many scholars are noticing a downward trend in the number of births.  As indicated by this trend birth rates begin declining in 2008.  The billboard has a number of telling details:  a young white girl and a motto:  “Not what to think/How to think” that suggests a very specific audience.
Agent:  Eleven years after the Great Recession, exclusive private schools are advertising to keep their enrollment constant.  At around 20,000 dollars per year, Sandia is out of reach for many students and professes that
“…we will inspire our students to discover their purposes in the world by:
·         Developing essential skills and intellectual potential through challenging academics;
·         Cultivating a socially responsible environment of innovation and creativity; and
·         Engaging as a vibrant community for the betterment of society.”

Agency:  Though this is not an exact figure, but the rough range of an electronic billboard is from 3000 to 7000 dollars per month.
Purpose:  On its surface the purpose of the advertisement is pretty straightforward.  That purpose could be actualized with an increase in enrollment, but I think the messaging is a little bit more nuanced and speaking to the concerns of a certain population and ideology.
First, the picture of the little white girl suggests that they are marketing to white parents.  In these times with the Bechdel Test , representation is an important consideration.  If their purpose was to increase enrollment from underserved people than having a person of color be the face of your campaign might be a more effective choice (New Mexico is a minority-majority state), but since they also include, “Not what to think/How to think” as the catch phrase they are targeting a specific demographic.
The idea that schools are teaching students “what to think” is not new.  In fact, many conservatives argue that schools are involved in an ongoing campaign of indoctrinating students with a liberal bias.  So parsing out the difference between what to think versus how to think speaks directly to conservatives.
In essence Sandia Prep is saying that education can be done from an ideologically neutral perspective.  While there are certainly subjects that strive to be ideologically neutral, it rarely is that simple.  Education, by its nature, changes people.  Indeed, one of the arguments for a public education states, “To educate is to prepare and train someone in the necessary skills to have the ability to participate in society as a full citizen.” While Sandia’s mission statement supports that argument, can education ever be ideologically neutral?
Take the following examples:  1) a biology teacher teaching Evolution as the prevailing theory for the complexity of life we see today and 2) a biology teacher arguing that all life was created by a higher power.  The first would clearly be something that modern science supports and a competent teacher would also teach the scientific method as a way to continually test that hypothesis.  At no point would the teacher expect their students to take their assertions on faith. Yet, if a biology teacher were to teach that all life was created by a higher power, that’s exactly what they would be asking, they would, in essence, be indoctrinating their students.  If creation were to be taught in a science class, people arguably could say that it doesn’t belong and is not appropriate.  Arguably, it could be seen as mere indoctrination since it can’t be proved using the scientific method.  Now I’m not saying that teaching that life was created is beyond the scope of what a school should teach, but I do think it wouldn’t be appropriate to teach it in a science class.  The rigor of science depends upon adhering to the scientific method, stating provable hypothesis, etc.
Likewise, since the vast majority of scientists agree that climate change has been caused by humans, it would be irresponsible to teach students that climate change does not exist.  Yes, there are questions of the validity and reliability of the conclusions, and yes the system is very complex and it may not be possible to control for every variable, but teaching students what are our best understood facts and how we arrived at them is indeed a worthy project and a worthy education.
But in both cases neither viewpoint seems ideologically neutral.  For a certain belief system, teaching Evolution or Anthropogenic Climate Change can be seen as ideological, as teaching students what to think.  There is certainly room in both subjects for people to question the science but to suggest that the science is ideological and serves no other purpose than to indoctrinate students is, at best, dishonest.
And that is just the science curriculum.  In the humanities the questions become even thornier.  Yes, we can teach the traditional story of the founding of America, but would it be irresponsible to not teach about the Spanish exploration and conquest of Mexico as also contributing to our understanding of the history of America, especially in New Mexico?  Should the French-Indian war be a part of understanding of how America was settled?  And wouldn’t those areas of understanding leave a student to conclude that maybe America is not the “shining city on the hill”.  That our history is, at best, complicated and paints a more nuanced and troubling view.  Wouldn’t ignoring the facts and events of history of all Americans be another type of indoctrination?
What I’m arguing is that the message of the billboard is designed to appeal to a conservative, white consumer base.  Statistically, whites are the main subset that could probably afford the tuition of Sandia Prep.  Likewise, whites make up the majority of people who support the Republican Party, the conservative party.  And while they may level the charge that education as currently structured is indoctrinating students, I’d argue that the students are drawing their own conclusions.  If they are more critical of American history or capitalism or how democracy works or Christianity, it is not because they were indoctrinated by the liberal left but that they resisted the indoctrination of the conservative right.  And to suggest that a school could teach a student “how to think” without engaging in some form of indoctrination is dishonest.  As stated above, education is about creating students to engage in society and increasingly we are becoming a more diverse and varied society.  And unless we are preparing students for interacting and respecting other viewpoints then we, as educators, are not doing our jobs.
September 23, 2019

thanks for this analysis!