If the 1st Amendment protects Free Speech, it also protects my deafness to it as well.

The year was 1998 and I’d recently freed up my schedule so that I could go to this poetry open mike at a place just down the road called Best Price Books & Coffee.  At the time there were a lot poets every week.  We’d meet up before and write or talk and get to know each other and then the host would come in, set up the mike on the patio (during the warm weather) or inside in the back room of the coffee house.  There’d be poets, musicians, comedians, random street people who’d stand up and ramble for a few minutes until the host would sort of shoo them off stage, but everyone got to speak if they wanted to. 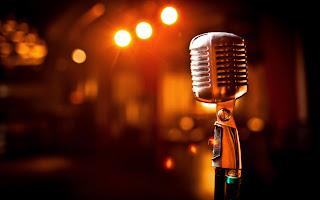 The notion of hate speech was a relatively new one, and I didn’t really get all the nuances.  I’m a white, cis-gendered male that comes from a middle class family so I have never experienced discrimination or been the victim of hate speech but I know that the people who I liked to listen to did not look like me or share my background.  They spoke with a conviction and power that made me take notice.  Occasionally, someone from a similar background would impress me as well, but, as a rule, I didn’t feel like they "needed" the open mike.  Our voices and experiences had dominated for far too long, and I wanted to be a part of something that let the unheard voices speak and speak proudly.

That fall, we wrestled with free speech versus hate speech in a way I haven’t seen since.  I remember both nights pretty clearly.  The stable of regulars sat at the same tables, cheered each other on, encouraged the newer people to take more chances, etc.  I was a part of a community of writers, and I felt like I belonged.  Certainly there were ones that felt left out but most of that went away over time.

One of them, Johnny was older than I was and struck me as sort of bitter. He resisted our ovations to sit together and rarely commented on others' work.  I took his bitterness as sort of a side effect of being dry.  He'd made mention of it before, and it sort of struck me as bitterness being brought on by the fact that he could no longer do what he wanted, and what he wanted to do was drink.  Yet, he also wanted attention and would push it any chance he got.  On this night, Johnny got up and read his new poem.  He said, “This one is dedicated to all the fat chicks….”

The air crackled with disgust and you could see the regular readers sort of close off and withdraw.  At the end of the night, his was the poem we talked about, and his recitation was the one that prompted us to talk to the host.

The host was just as perplexed as we were.  He didn’t know what to do. He'd tried to talk to him at the end of the night and Johnny wasn't open to it.  He clearly wanted to ban Johnny, but this was an Open Mike.  Some of the other hosts around town weighed in and argued that he could ban him for spewing “hate speech.”  Just because it was the first amendment didn’t mean we had to protect his right to say what he wanted if it actually hurt people, and judging from the reactions of people in the room it was a pretty triggering episode.  Poets went home hurt no longer feeling this was a safe space for them.  Yet, the host, who didn’t get into this to police what people were going to say, didn’t feel like he could ban him.  And that’s where we left it.

The next week we sat around the tables again as first the host came in and set up.  Then Johnny walked in and without saying anything put his name down on the list.  We looked at each other and as he went outside to smoke, one of the poets asked, “Do you think he’s going to read that poem again?”

Another one said, “Well, if he does I’m just going to walk out.”

That struck me as an entirely acceptable response.  We weren‘t preventing him from exercising his first amendment rights, yet we didn’t have to listen to it.  We had the option of leaving.
When Johnny’s turn came up, he stepped up to the microphone and said, “This one is dedicated to all the fat chicks.”

That was all it took and one by one we all got up and silently left the room.  By the time Johnny finished his poem, he and the host were the only ones left.  He glared at us as we all came back in. Ultimately, he left without saying “Good-bye.”

The next week Johnny wasn’t there and I haven’t seen him at a poetry reading since, yet I see him all the time.  Johnny now works about 3 days a week holding up a sign for a local restaurant and blowing a whistle as he points to the restaurant.  He wears a Mexican wrestling mask and points to the restaurant from the median.  He’s never acknowledged me as I’ve walk by,  nor have I reached out to him and wondered if he still writes poetry. 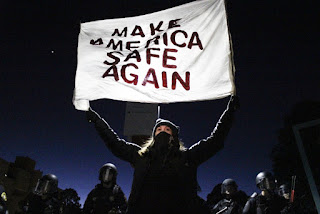 So, when UNM erupted in protests over the College Republicans inviting Milo Yiannopoulos to speak, I couldn’t help but think back to my younger days.  There are a lot of good reasons that he should’ve not been invited, and there are a lot of responses that UNM could’ve taken but at the end of the day they let him speak regardless of the harm it would do to many people in the community.

But I’m curious as to what would’ve happened if people who disagreed with him would’ve gotten a sizable chunk of tickets, attended the event, and then upon hearing the first vile thing, just got up, en masse, and walked out?  Maybe the crowd would’ve cheered?  Maybe Milo would’ve made some sort of remark of good riddance?  But it seems to me that the more reasonable we act the less reasonable Milo and people who support his viewpoint become.  At the end of the day, maybe what they are craving is headlines and attention?  And by boisterously opposing him speaking at every turn, we are giving him exactly what he wants.  But what if he speaks and no one is willing to listen, what if silence speaks just as loudly as words?


I don’t know, but I’m not sure if I can take four years of screaming and gnashing of teeth every time this cadre does something I find offensive.  What if we all took the opportunities we are going to have to write our congress members, donate to an organization that supports our values, and even attend rallies that help build solidarity?  What if we focused on what makes us feel empowered and heard instead of getting in a sort of metaphorical shouting match with people who have no incentive to change?  Let’s give them an incentive to change by asking them, simply, “Hey, come on in.  We’d love for you to be a part of the community but understand that what you are saying is hurting us.”