If Farina means Flour, does that mean we don’t get any cheese on our Pizza? 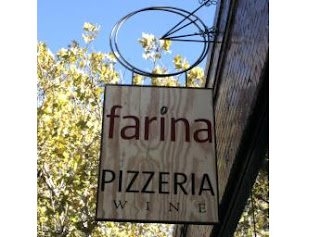 Down Route 66 from the student ghetto, through the empty office wasteland and cheap motels of the eastern edge of Edo (East Downtown), Farina Pizzeria holds court in a long, exposed brick wall flat with a slightly elevated patio jutting out from the back of the building with scenic views of a parking lot, a dentist office, the fancy Artichoke Café, and the ever empty Pop-N-Taco like a misplaced Forepeak on a too long ship.  It’s the rugged façade, the slightly seedy ambience of Central Ave, and exposed brick that testifies that the pizza here is special (it better be because you either live in the neighborhood or drove the above gauntlet to get here).
Inside, along the west wall and in the middle of the restaurant, a polished wood bar with two sets of black handled taps, fine liquors lined up behind, and slightly tilted wine bottles sets the mood as to what to expect:  casual yet quick service, whispered conversations, and simple, yet tasteful pizza.  Though there isn’t a sign that says, “Please Wait to be Seated,” we were immediately greeted upon entering and then told, “Sit wherever you want.”
We inquire, “Patio?”
The server, holding a pepper grinder, with a black button down shirt and white apron that stops below her ankles motions with her head and says, “Sure.  Back that way.”
We are greeted by two other staff members:  another server and (judging by his blue oxford shirt, grey slacks, and clean shaven face and closely cropped hair) the manager.  We pass the two “Uni-Sex” bathrooms and push out the door to the patio.  Outside there are five black metal tables and despite my general aversion to having my back exposed, I take the chair that puts me in the very corner of the patio with the parking lot behind me.  It’s a rugged four top, but there are only two of us, and my wife and I are greeted immediately by the server who drops off the card stock menu (printed on both sides) and a simple typed listing of specials.  We ask him what’s on draft, and he runs down the usual variety of local brews.
We order:  me a local Pale Ale and my wife a strong IPA, and look at the menu.
I’m here for the pizza and try to steer my wife towards ordering one for herself so I can get one with meat or sausage.  Seriously, what is pizza for if not for the ease of delivering meat or sausage?  All other toppings seem pale imitations.  But, alas, she insists she’s not that hungry and aren’t the pizzas big enough to share?
They are (and at seventeen dollars a pop they better be), but it would be nice to have leftovers for my too long workday tomorrow, so I manage to steer her toward the salad and soup but will have to compromise on toppings, which is not really a compromise but straight up kowtowing to her dietary restrictions because I have none.
The server drops off our beers and asks, “Any questions?”
I don’t have much of a choice so I reset my sights on a vegetarian pie and narrow my choices to the Funghi or Margherita.  Clearly the Funghi has mushrooms, but it also has two ingredients I’m not so sure of.  So I ask, “What’s “fontina” and “tallegio?””
Our server pauses then says, “Cheese.  It’s basically white, stinky cheese.”
I nod in affirmation and say, “Sounds good.  I’ll take the pizza, funghi pizza,” as if I’m some sort of James Bond and have to order by second word first.
As expected, my wife orders a salad and a cup of Gazpacho.
We make small talk about our day and drink a couple swallows of our well-earned and refreshing beverages.  My Pale Ale is just the right amount of bitter, I think to myself, capable of cleansing a palate but not lingering too long, which will come in handy when my pizza arrives.
The pizza is about fourteen inches in diameter with a white flaky crust.  There’s a fine complement of chopped mushrooms, a sprinkling of thyme, and camouflaged by the white, stinky cheese, shallots, not onions mind you but actual shallots.  Cut in six slices, each slice varies in size, but the cheese is evenly melted and the crust is lightly browned on the edge.  A good pizza, I dive in, let my taste buds absorb the tangy, yet slightly sour cheese (by design) as we veer away from small talk and toward the business of consumption.
We eat without interruption, alternating bites of pizza with pulls from our beers, and I stop eating before I am completely full:  sated, but not overly full.  Our server returns and we ask that he wrap up the remains.
“Dessert?”
“No thanks,” we counter.

In a few minutes he returns with our check and the pizza wrapped in foil.  We’d eaten, enjoyed the quiet ambience of the patio, and still had food left over for today:  one slightly expensive ticket but enough food for two meals.
Posted by Don McIver