Keith Jarrett: The Koln Concert and What it says about Creativity

Life is about listening.   Sometimes what life is saying comes at you in in strange ways.
On Friday, I was reading this story on Salon.com and it mentioned that few jazz musicians have the same clout as they once did.  Of the few who still draw considerable audiences, it mentioned Keith Jarrett.

I don't know Keith Jarrett, but I've been trying to school myself on jazz for the better part of a year now.   Since I'm relatively new to this jazz thing, I want to make sure I'm really listening to what people think of as "great."   With that in mind, I bought a book:   The Penguin Guide to Jazz Recordings.   Under Keith Jarrett they mention the album,  The Koln Concert as his best album (part of any enthusiasts' "Core Collection").   So, when I saw the album while perusing Mecca Records in ABQ, I knew I had to buy it.   Life was talking. 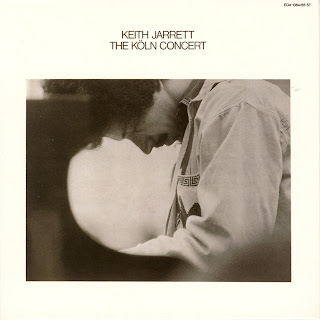 (So, go ahead and click on the above link from YouTube.   You can listen to the whole recording while reading this.)

What did I know?   Keith Jarrett's Koln Concert is a recording of a concert he gave in January of 1975.   The playing was improvised, but he'd requested a specific piano (which the promoter (for a variety of reasons) didn't provide).   The instrument he was using was not a "concert" piano but a "practice" piano.  Needless to say, he wasn't really happy with the piano and almost canceled the whole performance (sometimes the show doesn't go on), but the promoter convinced him to continue.   He goes on and what follows is the most mind boggling, amazing piano playing I've ever heard.  He knew something was happening; the audience knew something was happening; and you, dear reader, will know something was happening if you just listen.

Just the circumstances around this concert bring up some really important questions and even suggest some answers.

Question:   Are we responsible for the art we create?
Answer:  The sub-standard instrument was not what Jarrett requested, yet he goes on to create his best selling album of all time, a concert that many people note as "transcendent" and "sublime."   Thus, only to a degree.

Question:  What if he'd had the piano he requested?
Answer:  I postulate that we probably wouldn't be reading about this particular concert.  My theory is that it was him having to deal with a sub-standard instrument that forced him to play in some exciting and innovative ways that he wouldn't have done had everything gone his way.

Question:  So great art is an "accident?"
Answer:  Yes, but only to a degree.  Keith Jarrett was known as a gifted piano player and talented improviser.  He didn't just wake up one day with those skills.  He practiced, played, practiced, and played some more.  That way when the moment was right, he was able to grab it.   Elizabeth Gilbert has a wonderful Ted Talk about creativity and genius here that touches on some of what I see happening in this recording.

Likewise, Malcolm Gladwell in his book The Outliers:  the Story of Success has a chapter where he talks about the "10,000 hour rule."  In it, he talks about The Beatles' Hamburg days.   Shortly before they broke into the phenomenon we know of as The Beatles, they were a bar band in Hamburg.   There they played all the time, in front of live audiences, hour upon hour.   So, when they came to U.S. they knew how to capture their art and knew what to do with it.

Question:   What are you creating?
Answer:  We all need to write more.   When great poets talk about "writing everyday" they aren't necessarily saying that that is the only way to create great art.   What they are saying is that great art is elusive and if you don't have the skills (write everyday) you won't know what to do with it when it strikes.   And, maybe it strikes in some not so good situations.

This is one of my all time favorite recordings and I just got it on youtube to let my granddaughter hear it because the vinyl got misdirected long ago and then saw this post from you and i'd say there is definitely an unconscious place that we're all dancing in together.

and yes write all the time