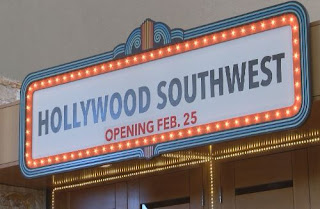 FADE IN:
EXT.  MUSEUM-DAY
A glass and brick building with sculptures made of bronze and metal arranged around a grassy lawn encircled by a sidewalk.   A middle aged white guy with a baseball cap walks into the shot, up to large glass doors and steps into the building.
DISSOLVE TO:
A small sign with a graphic of a the iconic "Hollywood" and below it "Southwest" announces the exhibit behind the double doors.
Middle aged white guy is now standing in front of a movie poster for Glenn Ficarra and John Requa's 2016 Whiskey Tango Foxtrot, starring Tina Fey.  He writes in a small notebook, "I was watching Whiskey Tango Foxtrot, a movie based on reporter Kim Barker's time in Afghanistan, when I was jolted out of the moment with a landscape I knew.  So as the credits rolled I kept reading until it confirmed that landscape that was standing in for Afghanistan was actually New Mexico."
DISSOLVE TO:
A wing in the exhibit.  On a brown wall, written in letters is a four paragraph essay under the title "Cormac McCarthy."
Middle aged white guy writes in the same small notebook, "I was watching the Coen Brother's No Country for Old Men in a small dark theater.  The scene was Sheriff Ed Tom Bell (Tommy Lee Jones) character trying to find Llewelyn Moss (Josh Brolin)  in El Paso but discovering as he pulls into the parking lot that he's too late.  The streetscape, the hotel, the parking lot all jolted me from the movie.  I leaned over to my wife and said, "I thought this was supposed to be El Paso because that is clearly Albuquerque."
She shushed me and said, "It is  El Paso in this movie.  No one knows what Albuquerque looks like.""
DISSOLVE TO:
Another wing in the exhibit.  A gate with the words "Bonanza Creek Ranch" written in bronze is mounted on the museum wall.  Next to it is a small DVD display with the owner of Bonanza Creek Ranch playing.
Middle aged white guy writes in the same small notebook, "A friend of mine was trying to break into the Santa Fe movie business and her first job was as a producer in a small production company that was filming a training video for the New Mexico Department of Tourism.  She hired me as her production assistant (PA) and basically I was to do anything she wanted me to do:  pick up breakfast burritos for the crew, drive across town to pick up materials they needed, and one day drive from Bonanza Creek Ranch, a movie ranch that had been featured in numerous movies, to Albuquerque to pick up half a dozen orange cones.  The highway department had been working on the southbound  I-25 all week and turned my drive from Bonanza Creek Ranch to Albuquerque  from an hour to a two hour plus ordeal, so driving back down to Albuquerque to pick up some orange cones wasn't my idea of fun.
Surprisingly the traffic in the middle of the day wasn't quite as bad, so I made it to Albuquerque in a little over an hour and I was tired.  All week I'd been getting up at five to make it to Santa Fe by seven and then being the go-to PA for this training video until eight or nine at night.
So I picked up the half dozen cones and knowing I wasn't going to be expected back anytime went home and took a half hour nap."
DISSOLVE TO:
A museum wall with a poster of Brian Cranston (Walter White) standing in his underwear and a green buttoned down shirt with an RV in the background.  He's holding a 9mm handgun in his right hand and just below his left hand is a gas mask.  Written in green letters, slightly offset, is " Breaking Bad."
Middle aged white guy writes in the same small book, "I was buying a smattering of groceries from Smith's, or as we liked to call it, "Ghetto Smith's."  In line in front of me buying some half and half and a head of broccoli was Aaron Paul (Jesse Pinkman).  I watched him pay, smile at the cashier, and then leave.  As I put my groceries down, the cashier said, "Yes, that was him."
DISSOLVE TO:
A cluttered living room with music playing from the stereo, a computer is set up on a small table in one corner.  Sitting at the computer, middle aged white guy is typing, "Seeing the "Hollywood Southwest" exhibit is a bit like touring someone's obsession with movies in New Mexico.  Most of the pieces in the exhibit come from UNM Professor Paul Andrew Hutton's personal collection and reflect a historians' curiosity of the southwest and how the west is portrayed in cinema.  While there is also work outside the western genre, the real strength of the exhibit is seeing not only the films that have been shot here but understanding how the genre has transformed from the days of having Burt Lancaster play the titular character in a film called Apache to seeing the diversity in the cast that reflects how I see Albuquerque in Breaking Bad.  It’s a living document to the influence of movies in New Mexico and well worth a visit.  The exhibit runs until August 27th at the Albuquerque Museum and it only costs a whopping three dollars if you are from New Mexico."
FADE OUT:
Posted by Don McIver