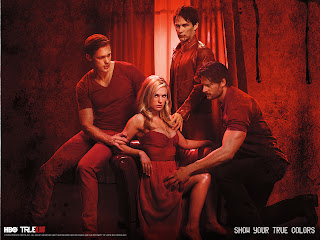 Maybe we aren’t who the series is designed for? My wife and I turned off Alan Ball’s True Blood (Season 4, Episode 9) with a disappointed thud…as if our computer finally going to white noise that previously always announced, “This is an HBO show and they’re always good,” was suddenly saying, “Don’t get your hopes up.”

It wasn’t that we tried; we’d watched three full seasons (delayed by us not having cable nor subscribed to HBO-GO), but we just couldn’t do it anymore. Suddenly, I could see the machinery of the story telling. In True Blood (I know it’s based on a series of mystery books, and after perusing the web I know many of the elements are lifted straight from the book) the story telling became “Hey you like the characters so watch what happens when I put them in this situation,” and “Oh, aren’t they nice to look at too.” Though missing the sexuality of True Blood, it’s the same story telling that was employed through all 5 seasons of Battlestar Galactica (BSG), which, nevertheless, had many redeeming qualities.

For example, a couple of weeks ago, I thought I’d try watching BSG again. I got through the first 2 episodes okay, but found myself stifled re-watching episode 3. It was a physical reaction. Suddenly, I just didn’t want to invite all that stress into my life, and since I’d already seen it, there was no reason to watch it again. The show has elements that deliberately manipulate the viewer into being stressed out.

A lot of good storytelling does that. And science fiction (as well as mysteries) as a genre certainly want the readers to identify with the protagonist and have certain elements that make it a page turner. But if you already know the outcome, then there’s no reason to read/watch it again. That was my reaction with BSG and, also, now with True Blood. The stress, situations, and identification with the characters keep you watching when your body is staying stop it, turn it off, run for the exits. It literally creates an endorphin rush (normal stress response) and actually hooks you. Watching BSG, and True Blood, is basically addicting.

Though I under-appreciated it at the time, one of the elements that kept me interested in BSG was that quite often the show raised some contemporary, thorny issues. For example, when the crew finally tries to make a go of it on New Caprica only to be found by the Cylons, they have to become terrorists to survive. Coming when it did during our own political history, putting the main characters in the role of terrorists is a pretty brave piece of storytelling and makes it entirely worthwhile.

Similarly, True Blood, at first, seemed like it would raise some interesting points about race relations. It was pretty blatant that there was a sort “civil rights” slant to True Blood, and the fact that it took place largely in the south made the story lines initially compelling. But it also has the elements that seem to be a part of every HBO series: really pretty people getting naked (at least one shot of breasts in every episode). So suddenly, they’ve taken what could be an interesting story line, stripped out the allusions to racial history, added in a big dose of stress where every episode has to have some sort of cliffhanger to make people watch the next, mixed with sex and, presto, you have an HBO show.

Gone is Alan Ball deliberately tackling issues like he did in Six Feet Under replaced with nudity and suspense. Gone is any pretense that the show is going to bring up any lingering racism in the rural south replaced with some sort of “strategy” where vampires can achieve equality just by handling the politics. Gone is any pretense that we may all be more alike than different replaced with Vampires, Werewolves, Shape-shifters, Witches, Shamans, Fairies, and Skin-walkers. Have we got all the demographics covered? Good looking northern Europeans—check; sexy Native American shapeshifter—check; Hispanic homosexual—check; uneducated, drug addicted red necks and power hungry evangelicals—check; breasts—check.

When Alan Ball’s American Beauty was being raved about in 1999 I tried to like it. I did. But the suburbs that he painted didn’t look like the suburbs that I grew up in. And while Kevin Spacey and Chris Cooper are really good actors, I just couldn’t buy the whole set-up. And now, I feel like he’s dabbling with people again he just doesn’t get. At least the cosmopolitan, conflicted Angelino of Six Feet Under is somebody he probably knows? The rural south, meanwhile, is certainly inhabited by people he doesn’t interact with at all. It may make for interesting genre fiction, but serious television? True Blood has a veneer of seriousness, but after turning off episode 9 of season 4, I just didn’t care. It all just seemed designed to keep me watching and seemed to have lost any deeply compelling reason for why.