Saw a posting today about the 20 greatest Dystopian books, and thought we needed a treatment for Conspiracy Lit. as well.

You ask, "What is Conspiracy Lit?"

Conspiracy Lit. is any fictional book that poses that their is some sort of all knowing, super secret society pulling the strings.

1.  Thomas Pynchon's The Crying of Lot 49.  Wow! I love this book.   I've loaned this book out so many times, I can't even keep a copy on my shelf.   Opened the door to Pynchon for me--which is a pretty strange world as well. 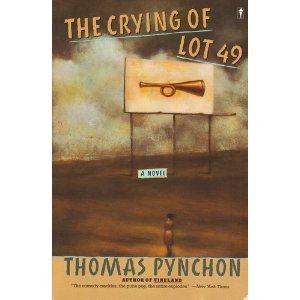 2.  Robert Anton Wilson and Robert Shea's The Illuminatus Trilogy:  The Eye in the Pyramid, the Golden Apple, and the Pyramid.  Technically, 3 books but when I was turned on to this one it was in the trilogy format so I read it as 3 books.

3.  Robert Anton Wilson's Masks of the Illuminati.  Yes, I'm skipping the Schroedinger's Cat Trilogy.   It is a good book, but not really Conspiracy Lit.  This, though set in the time of Einstein and Joyce, they are uncovering a conspiracy.   A nice way to get you ready for The Illuminatus Trilogy.

4.  Umberto Eco's Foucault's Pendulum.  I once had the accountant at a restaurant I worked at pronounce, "I know of a book that no body ever finishes," and then preceded to name this one.  Of course, I'd read it twice by then.  Great book!

5.  Thomas Pynchon's Inherent Vice.  Similar and inferior to The Crying of Lot 49, but told with Pynchon's characteristic wit and hipness.  He can write a readable book when he wants to.

6.  Jim Dodge's Stone Junction.   For years I've been waiting for Dodge to write another book and he hasn't.  It seems he prefers the life of a tenured professor over writing fiction.  Sad, this was great, fun read.

7.  Arturo's Perez-Reverte's The Club Dumas.  When I was younger, I was also fascinated by all things conspiracy, and stumbled upon Reverte.  This and The Flanders Panel were great.

8.  Tim Powers' The Anubis Gates.  This book remains my single best grocery store book buy ever.  I remember buying it randomly at King Soopers just because the cover looked interesting and ended up loving it, loaning it to friends (I don't even have a copy anymore) and reading every Powers book after that.  Great Time-Travel/Conspiracy Lit. from a great storyteller.  His later work is a bit formulaic, but this one rocked for sure.


I know there's some I'm missing, but I've got to get back to work.   Leave a comment here or on the FB post that links here.   I know I'm not listing Dan Brown's The Da Vinci Code or Angels and Demons  because frankly both of those books suck!  Seriously...absolutely horrible books by someone who should've never gotten a publishing deal.