Although Of Course You Wind Up Liking Something You Liked Before

In 1987, I was a small, yet sizeable, group of young men that were drawn to David Foster Wallace's The Broom of the System.  I'd devoured Pynchon's V. and The Crying of Lot 49, and really was drawn to frenetic, post modernism but still didn't have the requisite skill to tackle Gravity's Rainbow.   So when a friend of mine recommended Wallace's Broom I read it, loved it, added him to a short list of author's I'd keep track of.   What that meant was that I'd buy Girl With Curious Hair, read a bit of it; buy Infinite Jest and A Supposedly Fun Thing I'll Never Do Again and give up on the first and devour the second.   And then I sort of lost track.  As usual with books I love, I loaned out Broom and never got it back (along with Jonathan Franzen's TheTwenty-Seventh City and Strong Motion:  A Novel) and just moved on.

So it was on getting ready for a road trip and having some sort of "Free Download" that I downloaded the audio book of Although of Course You End Up Becoming Yourself:  A Road trip with David Foster Wallace and then burned some of it onto a CD for a Thanksgiving trip to Denver. 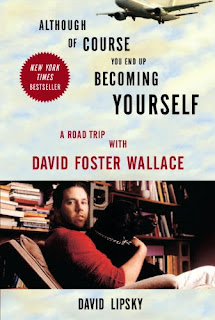 The book was great and though we didn't listen to the whole thing, I ended up buying it and reading it.

David Lipsky was careful to not interject too much of himself in the interview and basically just let DFW roll.   And roll he does.  The man is thoughtful, thoughtful about writing, promoting, the game, how television works, what good art should be, movies, music, you name it. His thoughts are a great way to get reacquainted with him (in my case) or acquainted with him if you haven't experienced him before.  And, as is now obvious by his suicide in 2008, he was way too "heady" to survive for very long.   As a lot of intellectuals can do, he could box himself in rather quickly and you could hear the gears sort of grinding in his head and proclaiming the actual futility of it all.  Not fun, especially when you know the ultimate outcome of the story.   I can't recommend this book enough.  If you are interested in a frank discussion about pop culture, art, what success can and can't do for artists then read this book.   I'll even loan you my copy... and expect not to get it back (its that good).
Posted by Don McIver