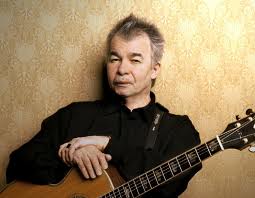 I guess I'm glad I don't let labels tell me what I should like anymore.   Of course, I'd be lying if I tried to hide behind the old cliche, "I like what I like" or "I think there's really only 2 kinds of music:  good music and bad music," cause I do think labels are important.   Not that I use the label to help me decide if I like it or not, but I do use it to try and understand it.   Thus, even though I've known many of his songs, I probably wouldn't have seen John Prine in concert just a few short years ago.

When I went to concerts, I wanted them to do something different than what I might get from listening to their work on the stereo, and most concerts just simply don't do that.   One of my earlier concerts, The Cars during their Heartbeat City tour reinforced that position early on.   Why would I want to pay to basically hear the album?   So, my choice of concerts was carefully screened:   would they do something different than what appears on the albums?  did the concert feel uniquely crafted for that night or are they going through the motions and playing the same set night after night?

But, now that I'm a performer too, I have a more discriminating eye and frankly, "I like what I like."   So, even though I didn't move around very much or John didn't take particular flights of jam fancy, his show had this real sense of introspection, reflection, a deep and abiding affection for the songs that he's created that made me want to cry at times.   I felt distinctively middle aged and whether it was holding Mindy's hand as he crooned, "There's a hole in daddy's arm where the money goes..." I couldn't help but think that John, frankly, doesn't have much longer to do this.

He wasn't frail, but I could sort of feel how hard being on the road must be.   And, for me listening to John Prine, who's probably spent the better part of his career being on the road for the last 50 years, live was a real privilege.   I don't think about it often, but at times, I'm downright thankful for what life has conspired to bring me and last night, up on the Mezzanine at Popejoy Hall, I'm not sure if there was any other path I could've taken that would've put me there.  The show felt like mine; the songs written for me; and the night, chilly, but calm, was one I wouldn't be replicating any time soon.

Thanks John.
Posted by Don McIver

Thanks Don, you just inspired me to look this guy up