50/50 and the normalization of Marijuana 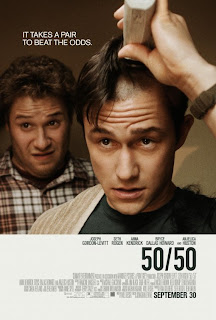 I was up at my my sister and brother-in-law's over the holiday weekend.   Good liberals in a small conservative town and we decided to head to the small art-house cinema see a movie.   The movie, 50/50 , is based on a true story of a young man's brush with an unexpected cancer.  It's funny; the chemistry between the two main characters:  Joseph Gordon-Levitt (Adam) and Seth Rogen (Kyle) was good.   But what struck me and surprisingly didn't strike my brother-in-law, who's a doctor in a medical marijuana state, is how "normalized" they chose to show the pot smoking.

Adam doesn't drink or smoke and his first dosage of medicinal marijuana is in the macaroons offered by Phillip Baker Hall (Alan) to deal with the nausea caused by chemotherapy.   From there, the filmmakers actually show Adam stoned, smoking with Kyle, and even socializing with Mitch (Matt Frewer) and Alan and smoking again.   It was suddenly normal for cancer patients to sit around smoking pot.  And the only noticeable effects that it seemed to have were the visual tricks it played the first time Adam ingested it.

Now I liked the movie, and as you know, am an advocate for legalization, but I almost thought that the movie was a tad bit deceptive.   For one thing, it does show that alcohol is bad when it shows Kyle so messed up he can't drive home, yet, it never shows Adam having any sort of detrimental effects from smoking.   You never see Adam stoned at work, or Kyle getting behind the wheel of an auto stoned.   So, from propaganda standpoint, we now see pot as harmless and alcohol as bad; we now see pot as medicine and medicine only.

Now my argument with the movie is not only that it was deceptive in how it showed pot, but it manipulates the viewer.  If the audience is anything like Adam (who's never smoked before the macaroons (?)), then don't you think he'd be a little bit more cautious?   Or is this generation (mid-20s) so exposed to marijuana that the scare tactics of DARE just didn't have any effect?