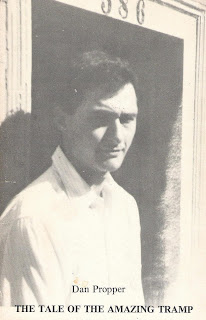 Wednesday marked another PnB, a full year of stirring up the format, trying to add community into the mix.  The format was basically an Open Mike, which we split into a group of 4 poets to kick off the show, and a group of 9 poets to end the show.   Sandwiched between that we had group reading of Dan Propper's "The Fable of the Final Hour" and a feature of David Rowe.

I'm not sure how I found Dan Propper's poem, but what immediately struck me was how the structure lent itself to a group reading.  Since it basically counts up to 60 with the following, "In the first minute of the final hour..." it was pretty easy to divide the poem up into 60 sections and pass out 2-3 slips of paper to everyone in the audience.   I screened out people who weren't going to stay for the whole time, so probably had 22+ reading the poem.   No one got to see the whole poem.   While it was challenging to hear everyone (especially if people couldn't or didn't project) it was a pretty cool way to remember this poem.  I don't know if we set any sort of record, which I jokingly said we were doing, but I've certainly never been to a reading where the audience interacted in this fashion.   Besides being a neat way to hear the poem, I think it also served a good community function because you had to listen to everyone...the whole reading became something larger (at least for the duration of the poem-my guess was it took about 20 minutes to do it).

We then welcomed our feature from New Orleans, David Rowe.   David is touring in support of his book "Unsolicited Poems" from Verna Press.  David has a very distinctive reading style..reminding me of the deliberateness of Bukowski mixed with the tonality of Jim Carroll.   For the record, that is a compliment.   His poetry was reminiscent of Bukowski, Kerouac, Burroughs and the delivery was pretty refreshing.  I'm not sure what I expected, but I know I really liked it.

Next month we'll have an Open Mike, a feature of Adan Baca from Espanola, and Haiku Head-to-Head (yes there is a cash prize), so let me or Eric know if you want to sign-up.