About ten years ago, I came up with the following idea:  what if I wrote with my left hand?  I suspected my penmanship would improve over time as I became more versatile with it, but would what I wrote and how I wrote about subjects change? 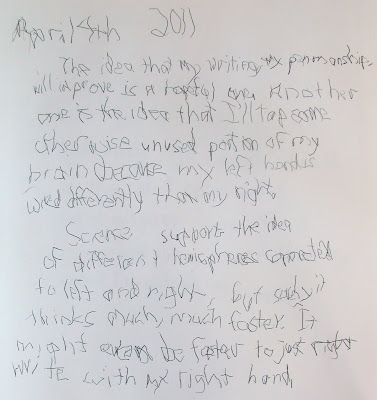 The idea that my writing, my penmanship,
will improve is a hopeful one. Another
one is the idea that I'll tap some
otherwise unused portion of my
brain because my left hand is
wired differently than my right.
Science supports the idea
of different hemispheres connected
to left and right, but surely it
it thinks much, much faster.  It
might even be faster to just right
write with my right hand. 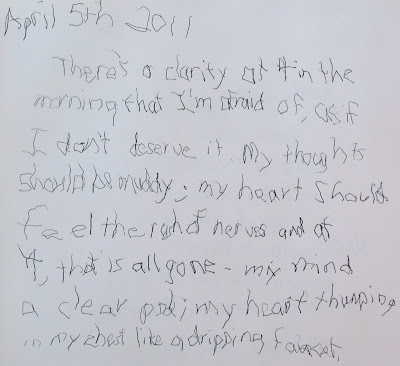 April 5th
There's a clarity at 4 in the
morning that I'm afraid of, as if
I don't deserve it.  My thoughts
should be muddy; my heart should
feel the rush of nerves and at
4, that is all gone--my mind
a clear pool; my heart thumping
in my chest like a dripping faucet. 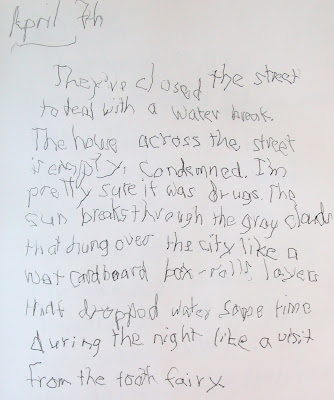 April 7th
They've closed the street
to deal with a water break.
The house across the street
is empty, condemned.  I'm
pretty sure it was drugs. The
sun breaks through the gray clouds
that hung over the city like a
wet cardboard box-- rolls, layers
that dropped water some time
during the night like a visit
from the tooth fairy. 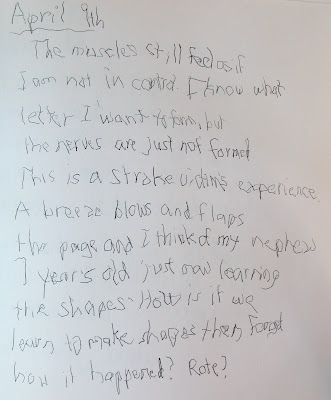 April 9th
The muscles still feel as if
I am not in control.  I know what
letter I want to form, but
the nerves are just not formed.
This is a stroke victim's experience.
A breeze blows and flaps
the page and I think of my nephew
7 years old and just now learning
the shapes -- How is it we
learn to make shapes then forget
how it happened?   Rote? 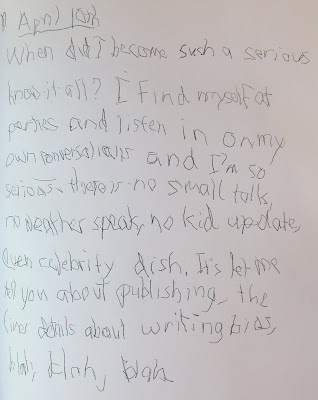 April 10th
When did I become such a serious
know-it-all?  I find myself at
parties and listen in on my
own conversations and I'm so
serious--there is no small talk,
no weather speak, no kid update,
even celebrity dish. It's let me
tell you about publishing, the
finer details about writing bios,
blah,blah, blah. 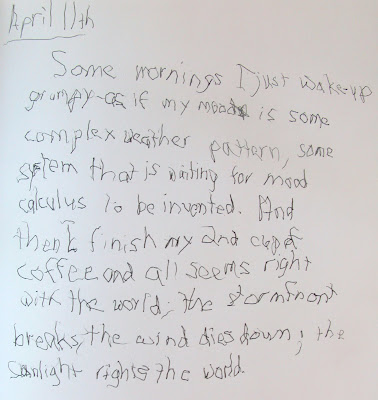 April 11th
Some mornings I just wake-up
grumpy -- as if my mood is some
complex weather pattern, some
system that is waiting for mood
calculus to be invented.   And
then I finish my 2nd cup of
coffee and all seems right
with the world; the stormfront
breaks; the wind dies down; the
sunlight rights the world. 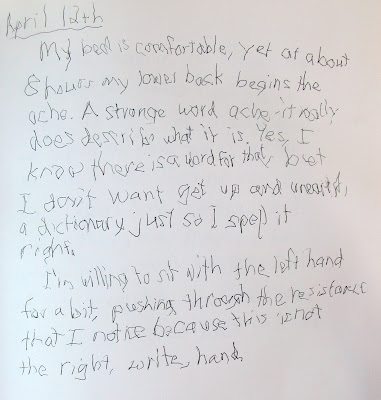 April 12th
My bed is comfortable, yet at about
8 hours my lower back begins the
ache.   A strange word ache--it really
does describe what it is.   Yes, I
know there is a word for that, but
I don't want to get up and unearth
a dictionary just so I spell it
right.
I'm willing to sit with the left hand
for a bit, pushing through the resistance
that I notice because this is not
the right, write, hand. 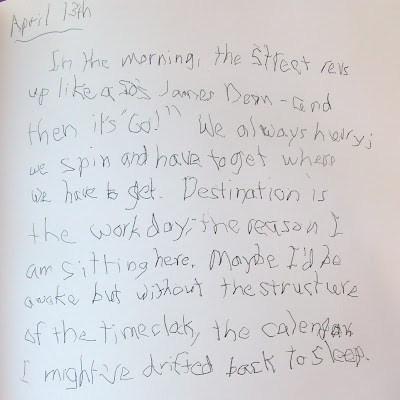 April 13th
In the morning, the street revs
up like a 50's James Dean--and
then it's, "Go!" We always hurry;
we spin and have to get where
we have to get.   Destination is
the work day; the reason I
am sitting here.  Maybe I'd be
awake but without the structure
of the timeclock, the calendar,
I might've drifted back to sleep. 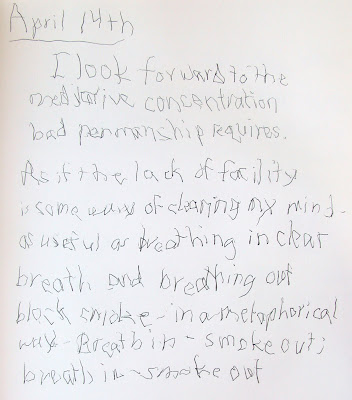 April 14th
I look forward to the
meditative concentration
bad penmanship requires.
As if the lack of facility
is some way of clearing my mind--
as useful as breathing in clear
breath and breathing out
black smoke--in a metaphorical
way--Breath in-smoke out;
breath in-smoke out. 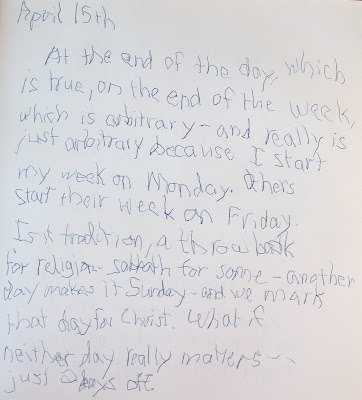 April 15th
At the end of the day, which
is true, on the end of the week,
which is arbitrary--and really is
just arbitrary because I start
my week on Monday.  Others
start their week on Friday.
Is it tradition, a throwback
for religion--sabbath for some--another
day makes it Sunday--and we mark
that day for Christ.   What if
neither day really matters--
just 2 days off. 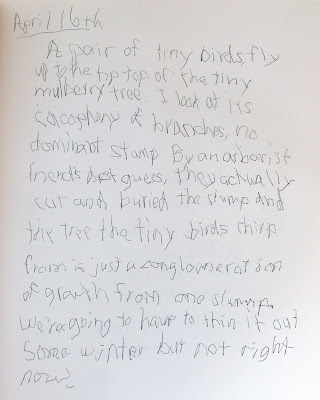 April 16th
A par of tiny birds fly
up to the tip-top of the tiny
mulberry tree.   I look at its
cacophony of branches, no
dominant stump.  By an arborist
friend's best guess, they actually
cut and buried the stump and
the tree the tiny birds chirp
from is just a conglomeration
of growth from one stump.
We're going to have to thin it out
some winter but not right
now. 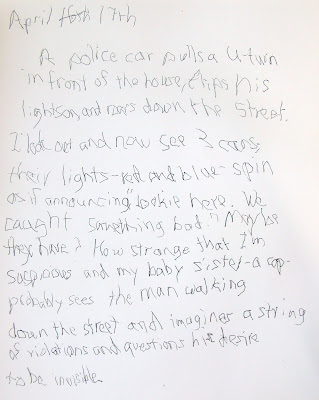 April 16th17th
A police car pulls a U-turn
in front of the house, flips his
lights on, and roars down the street.
I look out and now see 3 cars;
their lights--red and blue-- spin
as if announcing, "Lookie here.  We
caught something bad."   Maybe
they have? How strange that I'm
suspicious and my baby sister--a cop--
probably sees the man walking
down the street and imagines a  string
of violations and questions his desire
to be invisible. 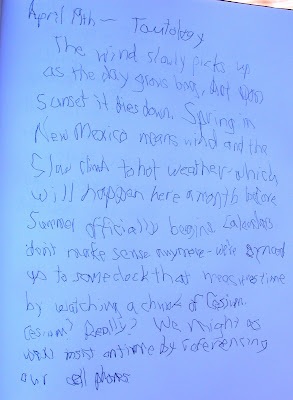 April 19th-Tautology
The wind slowly picks up
as the day grows long, but upon
sunset it dies down. Spring in
New Mexico means winds and the
slow climb to hot weather--which
will happen here a month before
Summer officially begins.   Calendars
don't make much sense anymore--we're synced
up to some clock that measures time
by watching a  chunk of Cesium.
Cesium?  Really?   We might as
well insist on time by referencing
our cell phones. 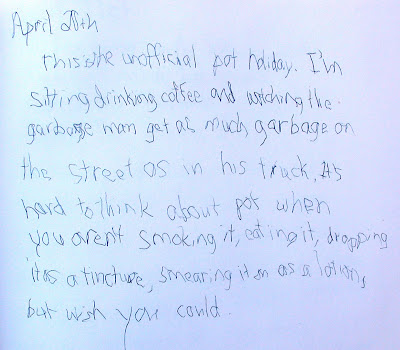 April 20th
This is the unofficial pot holiday.  I'm
sitting, drinking coffee and watching the
garbage man get as much garbage on
the street as in his truck. It's
hard to think about pot when
you aren't smoking it, eating it, dropping
it as a tincture, smearing it on as a lotion,
but wish you could. 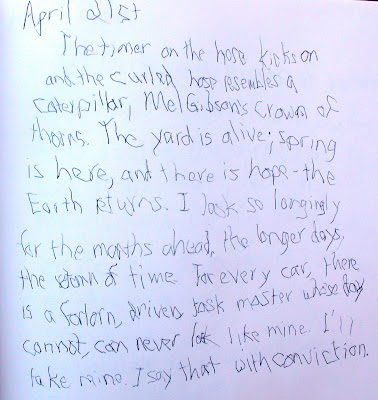 April 21st
The timer on the hose kicks on
and the curled hose resembles a
caterpillar, Mel Gibson's crown of
thorns.  The yard is alive; spring
is here, and there is hope--the
Earth returns.  I look so longingly
for the months ahead, the longer days,
the return of time.  For every car, there
is a forlorn driver, task master whose day
cannot, can never look like mine.   I'll
take mine.   I say that with conviction. 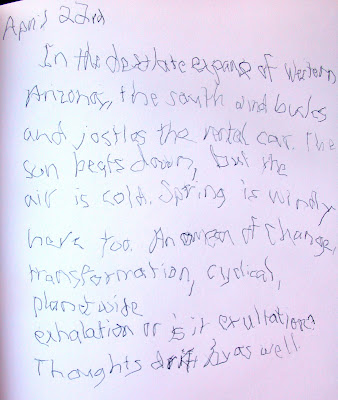 April 22nd
In the desolate expanse of Western
Arizona, the south wind bucks
and jostles the rental car.   The
sun beats down, but the
air is cold.  Spring is windy
here too. An omen of change,
transformation, cyclical,
planetwide
exhalation or is it exultation.
Thoughts drift by as well. 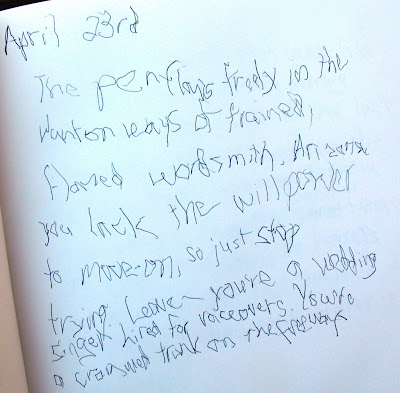 April 23rd
The pend flows freely in the
wanton ways of trained,
flamed wordsmith.   Arizona,
you lack the willpower
to move-on, so just stop
trying.  Leave--you're a wedding
singer hired for voiceovers. You're
a crammed trunk on the freeway. 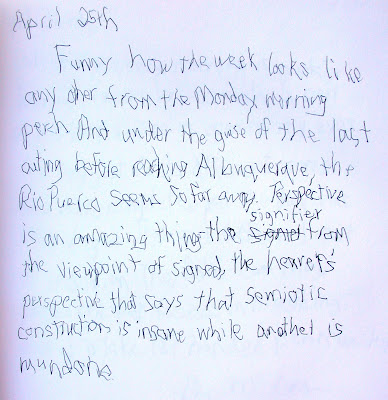 April 25th
Funny how the week looks like
any other from the Monday morning
perch.   And under the guise of the last
outing before reaching Albuquerque, the
Rio Puerco seems so far away.  Perspective
is an amazing thing--the signier signifier from
the viewpoint of signed, the hearer's
perspective that says semiotic
construction is insane while another is
mundane. 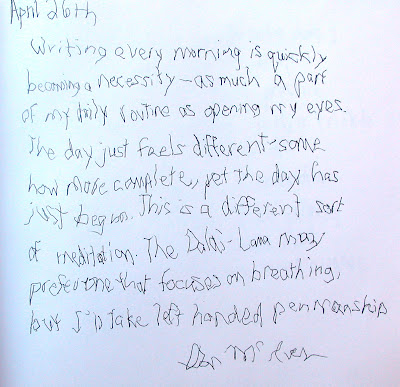 April 26th
Writing every morning is quickly
becoming a necessity--as much a part
of my daily routine as opening my eyes.
The day just feels different--some
how more complete, yet the day has
just begun.  This is a different sort
of meditation.  The Dalai-Lama may
prefer one that focuses on breathing,
but I'll take left handed penmanship.
Don McIver 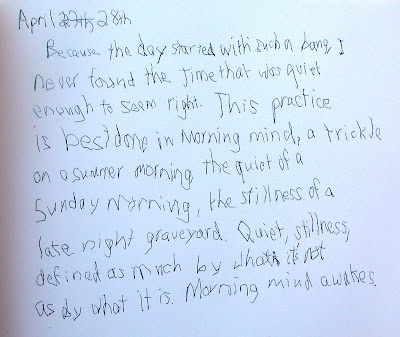 April 27th  28th
Because the day started with such a bang, I
never found the time that was quiet
enough to seem right.   This practice
is best done in the morning mind, a trickle
on a summer morning, the quiet of a
Sunday morning, the stillness of a
late night graveyard.   Quiet, stillness,
defined as much by what it's not
as by what it is.  Morning mind awakes. 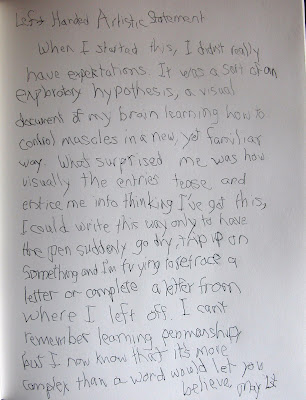 When I started this, I didn't really
have expectations.   It was sort of an
exploratory hypothesis, a visual
document of my braining learning how to
control muscles in a new, yet familiar
way.  What surprised me was how
visually the entries tease and
entice me in thinking I've got this,
I could write this way only to have
the pen suddenly go dry, trip up on
something and I'm trying to retrace a
letter or complete a letter from
where I left off.  I can't
remember learning penmanship,
but I now know that it's more
complex than a word would let you
believe.  May 1st
Posted by Don McIver

Kewl experiment.
I'm ambidextrous.
My right hand writes faster.
My left hand writes nicer, and it has a tendency to write backwards every now & then.