After getting everybody into the van we set out Saturday night for Dallas, TX to participate in the 2007 DIPS (Dallas Invitational Poetry Slam).

Honestly, I think the drive was a bit hard on everybody. Don't sleep much in the car, sleep even less when you finally get into the hotel, and then we have to perform.

The script was pretty much set. 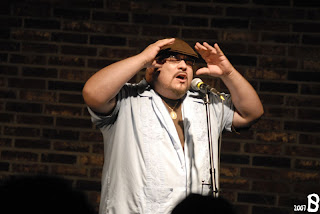 And here's the group poem: 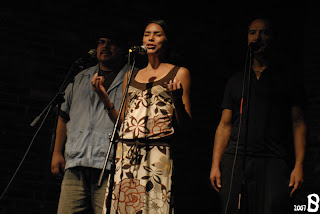 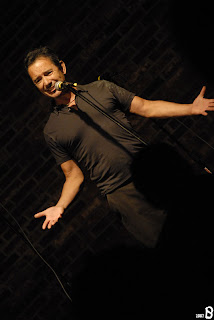 Well, things didn't turn out so well. Manny was a little flat, the group poem was a struggle (people flat in delivery and missing lines), and Jerry, actually left out a whole section of his poem.

Admittedly, it was the first time that they performed the group piece together. But the drive just wore 'em out.

When we got to Austin, we finally settled into the Hyatt on Tuesday.

And Tuesday night we performed.

First off, the group poem is everywhere.

Everyone is doing them, and I'm burned out on them.

The group poem, though a wonderful thing, has really taken over NPS. Strategically, its hard to beat a good group poem with a good, even great, solo poems, so teams use them--a lot.

But, Tuesday night, that's what we were going to do. So, after drawing the B-slot, we sent Jessica up to do "Nazi Feminism..." And she rocked it. The best I've ever seen. She won the round.

After two judges going to the bathroom, we were up first in the 2nd round and I called (as we scripted earlier) Jerry's poem "Que Amore." And...


It didn't work. The crowd just didn't get it and Jerry's score was the low for the night. Thus, with one poem we went from the high team to the low team. We gave everybody an opening and they climbed through like ants at a sugar factory. Not even Poet and the Wind, by Manny, could save us. And by then, the judges just weren't buying what we had...

Well, I think I blew it. In hindsight, when the judges went to the bathroom, the energy in the room dissipated and Shappy (a fine host) just couldnt' get them riled up enough. And I should've known that, seen that. I should've sent Manny up with Chicanismo (an anthem) and then bring Jerry out in the 3rd round, but I didn't.

And we walked away with a 5, which almost certainly means we won't be moving on to Semi-finals.
Posted by Don McIver