Family, poets from ABQ are family.

Former ABQ city champion and staple on the scene from 93-99, friend, and easily one of the funniest people I've ever met, Matthew John Conley opened the doors to his house and let 3 of us crash here before we check in at the Hyatt.

He opens his doors, calls OhioJake and friends, and we start talking and drinking even though he's working at 5 AM. 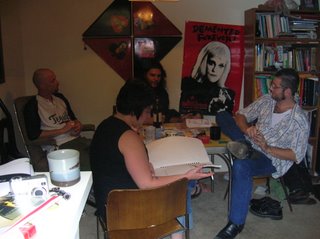 After a lengthy rehearsal, the team shows up, beer and other goodies in hand at 10 PM and we commence to get it on family style. 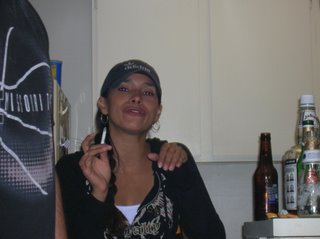 Laughing, sharing stories, ribbing each other and MJC heads off to bed at midnight.

At 5, he dances out and only my dysfunctional sleeping allows me to hear him.

Today the festivities unofficially begin as most teams show up at the Hyatt. Even though I don't even know where the airport is, I volunteered to run a shuttle to get poets. At Nationals, you never have enough volunteers . And ABQ has a unique perspective because we just hosted one of these and want to have fun but look on as the organizers stress and make furious phone calls. It doesn't seem that long ago that we did this very thing.

Sorry, no reports from Dallas as I was here: passing out flyers, hitting up a couple of thrift shops, doing some data entry and trying to be helpful.

From NPS 2006, Don needs a lot more sleep and he's signing off.
Posted by Don McIver